What is minimally invasive surgery? What does it mean for recovery?

With advancing technology, the doctors at Minnesota Women’s Care are able to provide less invasive techniques to effect the same and better outcomes as the invasive procedures of the past. No longer does a hysterectomy require 3 days in the hospital and 6 weeks out of work. Modern women are busy and need effective solutions that that their busy lifestyles.

When surgical intervention is needed, Minnesota Women’s Care uses the least invasive surgical options available. Our surgeons use the most current tools and techniques available. In fact, Dr. Ashford was a Minnesota pioneer of the da Vinci Surgical System, a complex robotic surgery tool that allows him to decrease the size of the incision, and provide a shorter recovery time with less pain.

About the da Vinci Hysterectomy

The da Vinci™ Hysterectomy is performed using the da Vinci Surgical System, which enables our physicians to perform the surgery with enhanced precision and control – using only a few small incisions. da Vinci Hysterectomy is one of the most effective and least invasive treatment options for a range of uterine conditions.

When appropriate, our doctors will suggest tradition forms of surgery. However, for most patients, da Vinci Hysterectomy can offer numerous potential benefits over traditional approaches to vaginal, laparoscopic or open abdominal hysterectomy. This is particularly the case when performing more challenging procedures like those involving excessive scaring.

Potential benefits of a da Vinci approach include:

Is this what is called "Band-Aid Surgery"? 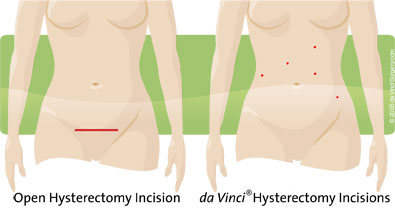 Yes. One significant difference with the da Vinci Hysterectomy is that it enables our physicians to perform the surgery with enhanced precision and control – using only a few small incisions. In many cases, the patient goes home with a few small band-aids covering very small incisions.

About the da Vinci Myomectomy

Uterine fibroids are benign (non-cancerous) tumors occurring in at least one quarter of all women. They can grow underneath the uterine lining, inside the uterine wall, or outside the uterus. Many women don’t feel any symptoms with uterine tumors or fibroids. But for others, these fibroids can cause excessive menstrual bleeding (also called menorrhagia), abnormal periods, uterine bleeding, pain, discomfort, frequent urination and infertility.

Treatments include hormonal therapy, mirena IUD, Hysteroscopic removal or ablation for smaller fibroids, uterine fibroid embolization or hysterectomy. Another approach is to remove the fibroid from the uterus without needing to remove the uterus. This conservation of the uterus allows a woman to receive surgical relief from the fibroid without losing the ability to conceive children.

While hysterectomy is a proven way to resolve fibroids, it may not be the best surgical treatment for every woman. If, for example, you hope to later become pregnant, you may want to consider alternatives to hysterectomy like myomectomy. Myomectomy is a uterine-preserving procedure performed to remove uterine fibroids only.

Each year, roughly 65,000 myomectomies are performed in the U.S. The conventional approach to myomectomy is open surgery, through a large abdominal incision. After cutting around and removing each uterine fibroid, the surgeon must carefully repair the uterine wall to minimize potential uterine bleeding, infection and scarring. Proper repair is also critical to reducing the risk of uterine rupture during future pregnancies. Menorrhagia is extensive menstrual bleeding.

A new category of minimally invasive myomectomy, da Vinci® Myomectomy, combines the best of open and laparoscopic surgery. With the assistance of the da Vinci Surgical System, our physicians can remove uterine fibroids through small incisions with precision and control. Conserving the uterus while providing the benefits of a rapid recovery, less blood loss, smaller incision and fewer complications the the daVinci System helps to provide.

What our patients say:

Dr. Amy Kelly has been our OB-GYN for the past 8 years and my husband and I cannot say enough good things about her. She is a highly skilled and competent practitioner and surgeon. We have recommended her countless times to friends and family, whether it be for OB services or to have surgery, and never once has she disappointed. Whether it is a highly complex surgical procedure or the attentive care needed during pregnancy, Dr. Kelly exceeds expectations in all that she does.
S.D. - Patient